Draw Something - The Best Social Game in the Planet

I wrote about OMGPOP two years ago since I became addicted with the game. Everyone was playing it in the university computer lab, even one of the comment I got from the post I wrote:

which translates to "I went to Toronto really (only) to play this game". And, last month, OMGPOP released an app that already goes viral: Draw Something.

The game works like this: you draw picture of words given, your friend will guess, then draw one for you. Simply fun and creative. Learn new words and how to draw them, guess your friend's creative drawing, and most importantly, connect with your friend with the language of drawing. It's magic! 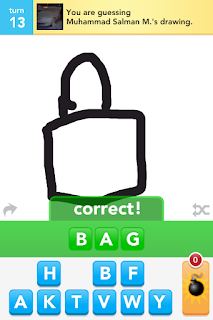 Download Draw Something now on iTunes App Store (link) and play a game with me!
Download on Android (link)
Posted by Unknown at 4:59 AM